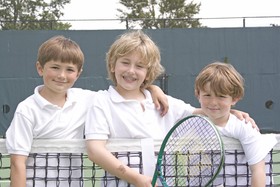 The Gateway Junior Grand Prix is a circuit of tennis tournaments geared towards the recreational player.  The circuit consists of a series of single-night round robin tournaments. The tournaments will be held at 7 different indoor clubs throughout the St. Louis Area. Players accumulate points at each tournament, and the player’s standings are updated on the website during the season.  The circuit begins in the fall and culminates with the Masters Championships in the spring.

**Please note: if you paid for the Summer Gateway 2022 season, you will be receiving an email with the summer sign-up code to waive the indoor league registration fee.

If you previously played in the league, go here for instructions on how to sign up with your current log-in information.

*Get a complimentary Gateway Tennis high quality Dri-Fit shirt after you register for the league. Shirts can be picked up at Racketman Pro Shop in Des Peres. Players will be notified when the shirts are ready for pick up.

Players who have received a final, year-end USTA District ranking in the top ten are disqualified from playing the circuit*. However, these top ten players may play two age divisions higher if one exists. Final, year-end USTA rankings which are published during the Gateway season are not considered – only published rankings before the season begins.

*Boys 10 and under USTA ranking not applicable

Before entering tournaments, players must register to play in the league.  To do this, the League Registration Form must be filled out and submitted online, and an annual $40 League Fee must be paid.

Once a player is registered to play in the league, that player can begin entering tournaments through our online system. The fee for all events, including Doubles Nights, is $38 per event. Masters Tournaments at the end of the season are priced at $64 (except for boys age group 10 and under, those Masters events are $49).  Entry deadlines will be the Friday before the event at 6:00pm.

Players may withdraw from an event for any reason (injury, schedule conflict, etc) with a partial refund if they withdraw before the entry deadline, which is the Friday before the event at 6:00pm. To withdraw, you must log into the the tournament system (at TennisTourTracker.com) and click on "My Schedule" and click on the red "Withdraw" button next to the tournament from which you wish to withdraw. No other method of withdrawing from an event will be considered. Players will be refunded $30.00 when they withdraw from an event prior to the deadline. Even if you decide to withdraw after the entry/withdraw deadline, please contact the Tournament Director. (list of contact numbers for each director here: https://www.stlgatewaytennis.com/map/)

Every tournament will use a round-robin format where the participants will play four different opponents. During these four rounds, a total of five games will be played, each time using no-ad scoring.  The Boys 16’s and Boys 18’s will play six game rounds.  After the four rounds, the top four finishers in terms of total games won will go into the playoffs.  In the playoffs, a full set will be played with the score starting at two games all. The #1 seed will play against the #4 seed, and the #2 seed will play against the #3 seed.  The two winners will then play for the championship, and the losers will play each other for third place.  The championship round will again be a set starting at two games all, and the third place round will simply involve the playing of a Super-Tiebreaker to 10 points.

Tournaments generally take about three hours to complete.  Players can be defaulted if they are 20 or more minutes late after the check-in time listed.

Points will be awarded as follows:

For the 10 and under Full Court events, the regular-sized court and the Green Dot Ball will be used.

Starting Fall 2021, we no longer offer Girls 10 and under age division.

Please be aware that all ties for ranking spots will be broken by computing the average points won per singles tournament. After the Masters Tournament has been played, any tie with regard to the rankings is broken based upon the performance of the players in The Masters.

One Doubles Night will be offered for each age group this season.  These will be fun practice nights.  No scores will be recorded, and no trophies will be awarded.  Each participant will be awarded 50 points.  These 50 points are added to a player’s overall point total.  A player may play up in an older age division in the doubles if they wish, but once you have played in one Doubles Night, that player will not be awarded any additional points.  If a player is ranked in more than one age group, fifty points will be added to all of the age groups that the player is ranked in.  Players are to sign-up individually for the Doubles Nights.  If a player would like to play one round with a certain person, this may be requested on the entry form.  The fee for these Doubles Nights will also be $38.  Please be aware that participants may play rounds with players of different age groups and genders.  All Doubles Nights will last exactly two-and-a-half hours.